Egypt approved new punishments Thursday for sexual harassment, amid rising pressure on authorities to fight the rampant phenomenon. Until now, Egypt has not had a law defining sexual harassment, despite more than 99 per cent of women being subjected to some form of abuse, a 2013 study by the United Nations said. But outgoing interim president Adly Mansour on Thursday approved a decree to make sexual harassment an offence punishable by up to five years’ jail, or fines of between $400 and $7,000.

[The penalties are] not enough for cases involving sexual assaults by mobs.

—Fathi Farid, a founder of the “I Saw Harassment” campaign

The decree defines harassment as any sexual or pornographic suggestion or hints through words, signs or acts. Fathi Farid, a founder of the “I Saw Harassment” campaign that documents sexual harassment of women, said the penalties were of “no value” because they gave the judge the right to choose between a fine or jail.

Sexual harassment made a crime in Egypt ~ Al Jazeera 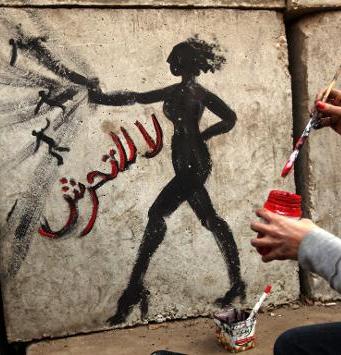