Egypt plans to build a new Suez Canal alongside the existing 145-year-old historic waterway in a multibillion-dollar project aimed at expanding trade along the fastest shipping route between Europe and Asia. The Suez Canal earns Egypt about $5 billion a year in revenue, a vital source of hard currency for a country that has suffered a slump in tourism and foreign investment since its 2011 uprising. The new channel, part of a larger project to expand Suez port and shipping facilities, aims to raise Egypt’s international profile and establish it as a major trade hub.

This giant project will be the creation of a new Suez Canal parallel to the current channel of a total length of 72 kilometres.

The total estimated cost of drilling the new channel would be about US$4 billion and be completed in five years, though Egypt will strive to finish it within a more ambitious three-year deadline, said Mohab Mamish, chairman of the Suez Canal Authority. The original canal, which links the Mediterranean and Red seas, took 10 years of intense and generally poorly paid work by Egyptians. It took weeks if not months off journeys between Europe and Asia, otherwise necessitating a trip round the tip of Africa. 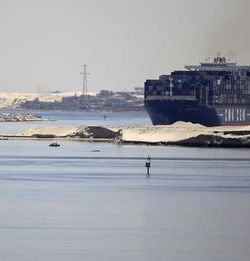