Five ex-Madoff aides face up to 20 years in prison

Five former employees of Bernard Madoff, convicted in March of helping the fund manager bilk investors of billions of dollars in his massive Ponzi scheme, will be sentenced this week, with prosecutors seeking prison terms of up to 20 years. Like the six-month trial, one of the longest white-collar trials in recent memory, the sentencings will take time, stretching out over a week in four separate hearings. The sentencings have been delayed for months, as defense lawyers fought the government’s demand that the three men and two women should be ordered to pay billions of dollars in forfeiture they say they don’t have.

There’s nothing for me to change from. It’s not like I ever considered myself a bad person. I made a horrible mistake and I’m sorry.

Bernie Madoff during an interview with Politico in March

First up on Monday is former back office director Daniel Bonaventure (pictured), followed in the coming days by portfolio manager Annette Bongiorno, computer programmers Jerome O’Hara and George Perez and portfolio manager Joann Crupi. The five aides were convicted on all counts, including conspiracy and fraud charges, by a federal jury in March. Prosecutors said they knowingly propped up Madoff’s fraud by creating fake documents and backdating trades. The government has requested more than 20 years for Bonaventure and Bongiorno, more than 14 for Crupi and more than eight for O’Hara and Perez. 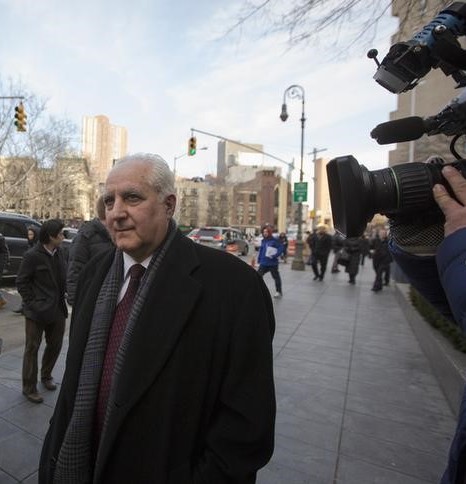