Around 5,000 demonstrators marched through downtown Sao Paulo against government corruption and the recent re-election of President Dilma Rousseff. The march, widely championed by opposition supporters, is the fifth of its kind in the weeks following Rousseff’s October 26 re-election to a second four-year term. Demonstrators carrying signs calling for a coup broke away from the main march and took an alternate path after several minutes of tension, according to police, who said the splinter group totalled around 400 people.

More than ever, we need to be mobilizsed. This is our weapon: our mobilization and our ability to be outraged.

Rousseff’s government is mired in a huge corruption scandal at state-owned oil giant Petrobras that has already led to the arrests of a clutch of top businessmen amid claims that dozens of politicians, chiefly Rousseff allies, received massive kickbacks on contracts. In addition, some of Brazil’s top companies, mainly construction firms, have become embroiled in the scandal and police have questioned dozens of suspects who have roundly denied accusations of wrongdoing. 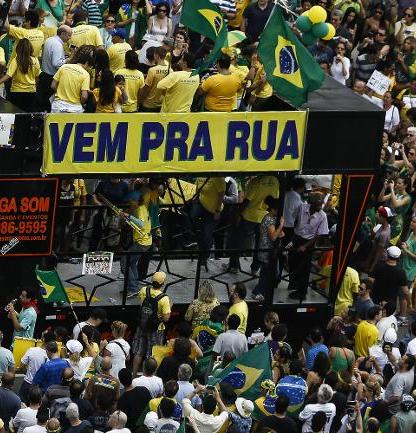