At least five people have been killed and more than 30 others injured after suicide bomber struck a British embassy vehicle in Afghanistan’s capital Kabul. Images showed the charred wreckage of the four-wheel-drive thrown on its side after it was hit by an explosives-packed car in the early hours of the morning. Two of the fatalities were identified as Afghan bystanders, although the nationalities of the remaining victims are currently unclear. A British embassy spokesman confirmed a number of passengers were injured in the attack but did not comment on fatalities. “I can confirm it was a British vehicle and there are some injuries. We are working with the Afghan authorities,” said the spokesman, who asked not to be identified.

A British embassy vehicle was attacked. There are some injuries. We are working with Afghan authorities.

He said the vehicle was not carrying British diplomats. The Afghan Taliban claimed responsibility for the attack, saying it “targeted foreign invading forces”. In a message on a recognised Twitter account it boasted that many foreigners had been killed. The death toll was announced by Afghan Health Ministry spokesman Kaniska Turkistani, who said up to 34 people were also wounded. Among them were five children. The explosion struck a main road in eastern Kabul, near the Green Village international zone and also destroyed four nearby cars. 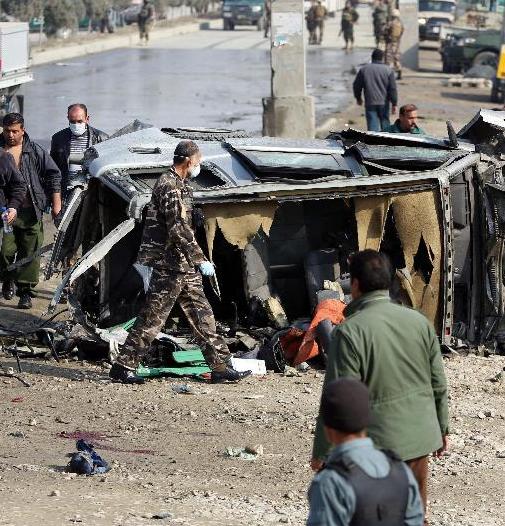