As many as 1,500 people gathered for Friday’s Ford Fest, an annual festival hosted by Toronto’s embattled mayor, but the event was marred by a clash between fans of Ford and supporters of the LGBT community. Ford fanatics reportedly engaged in verbal confrontations with a small group who crashed the event in order to protest what they’ve called the mayor’s homophobia, equipped with signs calling for Ford’s removal from office. A few members of Ford Nation reportedly destroyed the protesters’ signs before throwing them to the ground and stepping on them. A supporter of the LGBT community also claims to have been assaulted during the fracas. The mayor, claiming he had missed the confrontation because he was in a tent meeting with supporters, has apologized for the unfortunate turn of events.

It’s terrible things like that happen. I apologize and we have to move on.

Rob Ford said in an interview with CP24

Ford recently drew the ire of the lesbian, gay, bisexual and transgender community when he remained seated as city councillors toasted organizers of Toronto’s WorldPride festival with a standing ovation. He did not answer questions from reporters outside his office about why he didn’t stand along with fellow councillors, but said he’s not homophobic. Ford’s role as mayor has been largely symbolic since November, when city council stripped him of most of his power following his admissions of alcohol abuse and drug use during “drunken stupors.” Those admissions came after months of denials and were followed by the surfacing of videos that appeared to show the mayor making offensive and profane comments.

Poe Liberado, who faced loud jeers from the mayor’s fans at Ford Fest 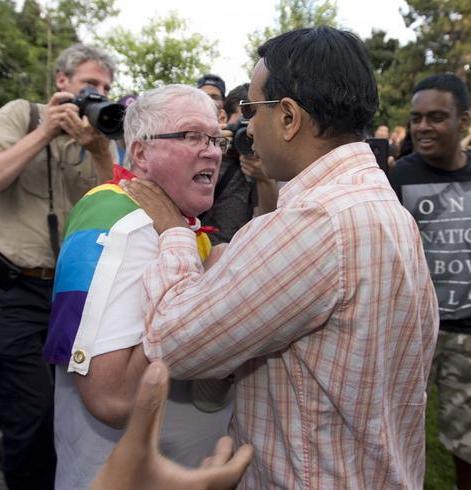