Two armed gangs killed four rhinos for their horns in rural Kenya this week in possibly the worst rhino poaching incident in the country in more than 25 years, the spokesman for Kenya Wildlife Service said on Friday. Poaching across sub-Saharan Africa is on the rise as armed criminal gangs kill elephants for tusks and rhinos for horns, usually to be shipped to Asia for use in ornaments and medicines. The poaching on Wednesday night took place at the private Ol Jogi ranch near Nanyuki, about 200 km north of Nairobi.

They’ve got high levels of security there, so the implications are that really rhino are not safe anywhere.

The killings take the number of rhinos poached in Kenya so far this year to 22, which leaves just 1,037 rhinos still roaming private wildlife conservancies and Kenya Wildlife Service national parks. Last year, 59 rhinos were poached in Kenya, a country famous for its sprawling Maasai Mara game park and abundant wildlife.

This kind of poaching is going to continue as so much money is involved. 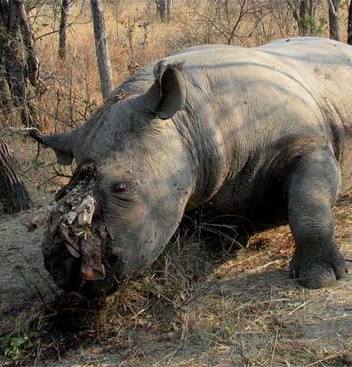