It began with Canada tweeting some not-so-friendly travel tips for the Russian military: a map showing Russia and labeling Ukraine as “not Russia.” That opening shot was enough to launch a Twitter war of words - and maps. The tweet by Canada’s NATO Twitter account went viral, being retweeted more than 29,000 times by Friday, including by U.S. U.N. Ambassador Samantha Power. The map was posted with an explanation:

Geography can be tough. Here’s a guide for Russian soldiers who keep getting lost and ‘accidentally’ enter Ukraine.

Russia struck back by tweeting its own map showing Crimea as part of its territory. Russia annexed Crimea from Ukraine in March. Kiev accused Russia on Thursday of sending tanks, artillery and troops across Ukraine’s border. Russia says its only active duty soldiers in Ukraine were the 10 captured earlier this week, who Moscow insists had mistakenly wandered across the border. NATO estimates that as many as 1,000 Russian troops are fighting inside Ukraine with an additional 20,000 soldiers massing on the border for support or possible reinforcements.

The original tweet was in the context of Russian military personnel being found in sovereign Ukrainian territory, claiming they were lost. 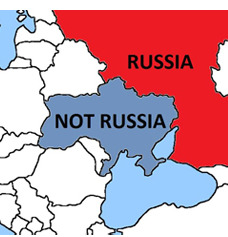