Iceland reduced its aviation warning level to orange today after concluding that a small eruption in the Bardarbunga volcano system that triggered a hours-long red alert actually posed no threat to aircraft. No sign of ash like that from the Eyjafjallajokull eruption that shut much of Europe’s air space in 2010 has been detected this time. But the Icelandic Metrological Office said a no-fly zone in a radius of 3 nautical miles just above the Bardarbunga volcano in central Iceland would remain in effect.

The small eruption is not a threat to aviation and the published aviation warning area has been cancelled.

Iceland’s largest volcanic system, which cuts a 190-km (118-mile)-long and up to 25-km-(15.5-mile)-wide swathe across the North Atlantic island, has been hit by thousands of earthquakes over the last two weeks and scientists have been on high alert in case of an eruption. Reykjavik’s Met Office said that just after midnight an estimated 1-km-long fissure eruption began in a lava field north of the Vatnajokull glacier, which covers part of the Bardarbunga system. 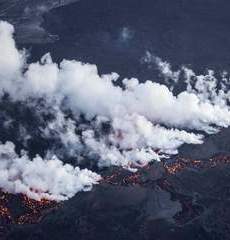