An Israeli cabinet minister has said Hamas’s military leader “deserves to die just like bin Laden”, after an air strike apparently targeting him left his wife and son dead. Interior Minister Gideon Saar told army radio Mohammed Deif was a legitimate target, as Hamas and Israel’s military carried out rocket attacks and air strikes following the breakdown of the latest truce. “He is an arch murderer and as long as we have an opportunity we will try to kill him,” Saar said.

I am convinced that if there was intelligence that Mohammed Deif was not inside the home, then we would not have bombed it.

It was not clear if Deif, who has escaped numerous Israeli assassination attempts in the past, was at home at the time of the latest attack. The air strike was one of around 60 carried out after Israel claimed three rockets fired by Hamas landed in open areas near the city of Beersheba on Tuesday. The latest rocket attacks were condemned by Israel as a “grave and direct violation of the ceasefire” and the Israeli military said at least 80 rockets have been fired since the truce collapsed. 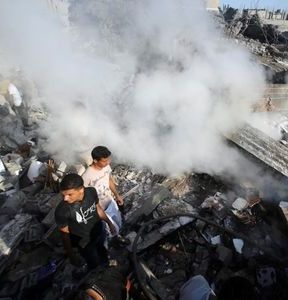