Hillary Clinton on Tuesday warmly welcomed the capture of a suspected ringleader of the deadly Benghazi terrorist attacks and predicted that he could help shed light on “unanswered questions” from the bloody September 11, 2012 assault. Clinton also indirectly addressed Republican criticisms about the year-and-a-half gap between the terrorist strike on the U.S. facilities in the eastern Libyan city and the weekend U.S. Special Operations raid that netted Ahmed Abu Khatalla.

There are still some unanswered questions. It was, after all, the fog of war.

Republicans have harnessed the 2012 attack — and the Obama administration’s initially shifting explanation for what motivated it — to besiege Clinton, who now appears poised to run for president in 2016. Asked whether, in retrospect, she wished she had not allowed Stevens to go to Benghazi, Clinton defended the diplomat’s decision to go.

If any of us had known that there was going to be a wave of attacks [across the region] I think we would have certainly cautioned and maybe even directed people to, you know, just shelter in place, so to speak, and wait to see what was going to happen. 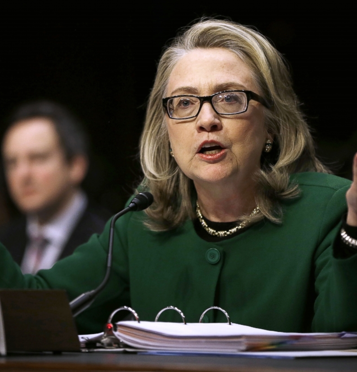