The political chief of Hamas has called on U.S. President Barack Obama to intervene with the Israeli government to “lift the siege” of Gaza and push for a ceasefire in the conflict to stop a “holocaust” against the Palestinians. The direct appeal to Obama was made—in English—at the end of a wide-ranging hourlong interview, conducted under tight security at a gated Hamas media office in Doha, Qatar. In the interview, Khaled Meshaal was at times defiant, comparing Israeli Prime Minister Benjamin Netanyahu at one point to Adolf Hitler. He also said Hamas is “ready for a ceasefire” and is willing to stop its rocket attacks but insisted Obama has a “moral responsibility” to pressure Israel to stop the conflict.

You as the leader of the most powerful state in the world, I ask you to call [on] Israel to stop its aggression on Gaza—and to lift the siege and open the cross borders and to rebuild Gaza.

Meshaal was critical of former U.S. Secretary of State Hillary Clinton, who in a recent interview with The Atlantic accused Hamas of “embedding rockets and command and control facilities in civilian areas”. Meshaal’s duelling attitudes—at times uncompromising, at times conciliatory—were seen in his responses to questions about the Palestinian charter, a 1988 document that vows to “raise the banner of Allah over every inch of Palestine”, renounces all peace initiatives and proclaims: “There is no solution to the Palestinian problem except by jihad”. Asked if he stood by the charter, Meshaal said, “People do not judge people by what they have on charters but what they act on”.

We are victims of aggression and occupation by Israel, and we hope when this conflict ends, what people will see from us is kindness and peace. 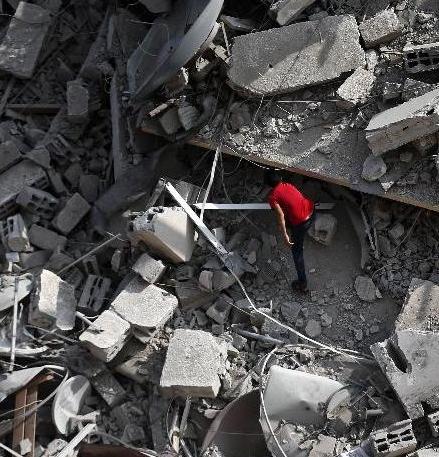