Intense bombing by a Saudi-led coalition hit Yemen again Friday, three weeks into an air campaign against Iranian-backed rebels, as Al-Qaeda seized more ground in the chaos despite UN calls for peace. Columns of smoke rose over an arms depot targeted by warplanes east of the capital Sanaa, witnesses said. The facility belonged to the elite Republican Guard, which remains loyal to former president Ali Abdullah Saleh. Renegade troops loyal to Saleh are allied with the Huthi rebels, whose sweeping advance forced President Abedrabbo Mansour Hadi to flee to Riyadh last month.

This works needs patience, persistence and precision. We are not in a hurry… We have the time and we have the capabilities.

Meanwhile, the United Nations says hundreds of people have died and thousands of families fled their homes in the war, which has also killed six Saudi security personnel in border skirmishes. UN chief Ban Ki-moon called for an immediate ceasefire and began the hunt for a new peace envoy to the country, where al-Qaeda is expanding its territory. His remarks followed the resignation of his envoy Jamal Benomar, who had lost the confidence of Saudi Arabia and its allies. They accused him of being duped by the rebels.

The United Nations-supported diplomatic process remains the best way out of a drawn-out war with terrifying implications for regional stability. 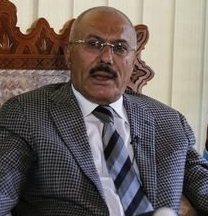