At least 15 people have been killed and more than 150 wounded in an Israeli air strike on a market, shortly after Israel said it was observing a humanitarian ceasefire. Medical officials said the strike hit a busy market in the Shejaiza neighbourhood between Gaza City and the Israeli border. Israel had said it would halt assaults in areas of the coastal strip where troops were not “currently operating” until 7pm local time (5pm UK time).

I condemn in the strongest possible terms this serious violation of international law by Israeli forces.

Hamas denounced the truce as a publicity stunt in the wake of a deadly attack on a UN-run school, and continued firing rockets into Israel. The school in Jebalya refugee camp, where aid workers say they are at “breaking point” helping some of the 200,000 people who have been displaced by the war, was hit around dawn. At least 19 people, including a young child, were killed, many of them as they slept. The UN Relief and Works Agency (UNRWA) said it told Israel “17 times” the building was being used by refugees, although it also confirmed other schools had been used to store weapons.

No place is safe, neither homes nor schools. We are defenceless.

Haleema Ghabin, a refugee in Gaza 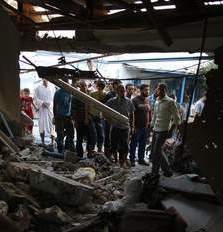