Just days after a massive hacking attack on employees at Sony’s Hollywood studio, distributor of the new James Franco comedy about a plot to assassinate North Korean leader Kim Jong Un, the actor mined the situation for all it was worth while hosting Saturday Night Live. “Something pretty crazy happened this week,” Franco said on the live comedy show. “I know eventually they’re gonna’ start leaking out stuff about me.” Fellow actor Seth Rogen then appeared at Franco’s side and warned: “It’s much much worse … An hour ago they released some of our private photos from our phones.” A series of pictures of the two in various compromising positions followed, ranging from them curled up together in bed to a mock Christmas card featuring the pair naked but for oversized Christmas stockings covering their nether regions, posing with Santa Claus.

The Sony cyber attack shut down most of the studio’s network for more than a week and hackers released sensitive data over the Internet, including employee salaries, Social Security numbers and high-quality digital versions of several unreleased films. Speculation has swirled that North Korea was involved as reprisal for the upcoming film due to be released on Dec. 25. Pyongyang on Sunday denied culpability but said it may have been the work of pro-North Korean supporters. Franco and Rogen’s film, “The Interview”, centers on a plot to kill Kim, used as comic fodder.

Oh also, all the girls who got any Instagram messages from me this year, last year, the hackers did it. It was the hackers. 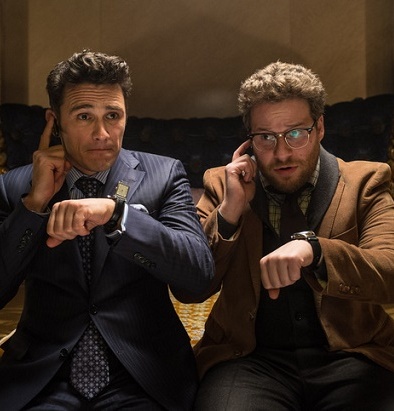