Comedian Joan Rivers is “resting comfortably” in hospital after a health scare, her daughter has said. The 81-year-old star was rushed from a doctor’s office to the Mount Sinai Hospital in New York in a critical condition, police and hospital officials said. She had been undergoing an endoscopy on her vocal chords at a clinic in Manhatten when she went into cardiac arrest during the procedure.

We ask that you continue to keep her in your thoughts and prayers. (Thanks for the) overwhelming love and support for my mother.

Earlier on Thursday, The Mount Sinai Hospital spokesman Sid Dinsay confirmed that Rivers was brought there in the morning. A patient reported to be in cardiac arrest had been taken from Yorkville Endoscopy to Mount Sinai by emergency workers responding to the call at 9:40 am local time. NBC television affiliate in New York said it was Rivers and that she had stopped breathing during a procedure on her vocal chords. 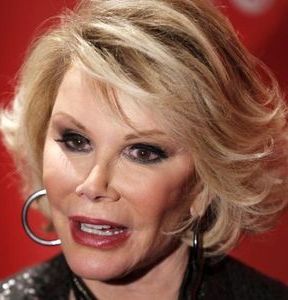