A court in Brazil has ordered Apple to pay a fine of almost US$9,000 per day if it does not remove a controversial app from its store. ‘Secret’ was designed to anonymously share gossip between friends, but it has also reportedly been abused by people posting libellous and bullying claims. Now Judge Paulo Cesar de Carvalho of the Fifth Civil Court of Victoria has given Apple 10 days to comply with an order to remove the app from its digital store in the country.

Words are at the centre of every secret, and it is our hope that our users will help us create a community that is a safe and liberating place for users to authentically express themselves. By using Secret, you agree to abide by these Community guidelines.

If it fails to act, the company will be fined 20,000 Reals (US$9,000) every day, according to Brazil news outlet Estadao. Apple has also been asked to remove the app from individual devices. Both requests are feasible—it is relatively simple to remove an app from the store, and it is technically possible to block software installed on iPhones and iPads, although it is usually used as a last resort. The same court has also ordered Microsoft to pull Cryptic—which is the equivalent Windows Phone app. 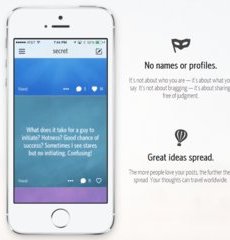