Chinese movie and TV star Jaycee Chan, son of veteran action hero Jackie Chan, is the latest actor to be arrested for drug-related crimes the South China Morning Post reported today. Jaycee, 32, was arrested along with Taiwanese moviestar Kai Ko Chen-tung in Beijing according to reports - although it is still unclear when they were formally arrested, however, both actors are active on Chinese social media and have not update their accounts since last Tuesday. The arrests of Jaycee Chan (pictured above with his father) and Kai Ko Chen-tung follow the arrests of Voice of China star Li Daimo in March, and the shock arrest of Gao Hu, a prominent actor starred in Zhang Yimou’s The Flowers of War, last week.

If he is capable, he can make his own money. If he is not, then he will just be wasting my money.

Jackie Chan, in 2011, on giving his fortune to charity instead of his son

The clampdown on celebrity drug use has been ordered by the Chinese government who have instituted a zero-tolerance approach illegal substances. Those stars caught up in drug scandals have been made public examples of and are facing threats to their future professional careers as state arts, film and culture bodies line up behind the government’s anti-drug policy. This month, the Beijing Trade Association for Performances and 42 performing art agencies and groups signed a commitment promising that they will not hire any actors who are connected with drugs. 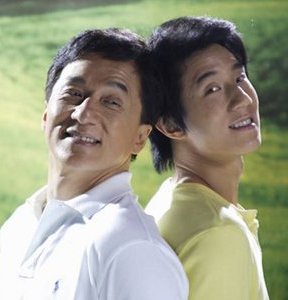