Migrants from Eritrea, India, found dehydrated in back of lorry at UK service station

Fifteen young migrants suffering from dehydration have been found in the back of a lorry at a service station in Somerset. Avon and Somerset police said the vehicle was stopped at about 1pm by the Southfields roundabout on the A303 near Ilminster after officers received calls about “shouts and banging” coming from the back of the lorry. The German lorry driver has been arrested on suspicion of facilitating the unlawful entry of people into the UK and is being questioned by officers at Yeovil police station. The 11 men, three women and a 15-year-old boy found inside the refrigerated box lorry, told police they were from Eritrea, in the Horn of Africa, and Kashmir, the northwestern region of the Indian subcontinent. The lorry, owned by Thermotraffic, an international freight company, left Sweden last Friday bound for Cornwall via Germany, the driver’s boss, based at the company’s Scandinavian branch, told Sky News. Superintendent Geoff Wessell told Sky News: “Officers opened up the back to find 15 people in quite a state of distress … It got very hot in the vehicle and they were quite dehydrated. They had been in the vehicle several hours.”

I am aware the driver was in contact with his company … and was trying to find a safe place to pull over. He was quite shocked to find people in his vehicle and he is assisting us with our inquiries. 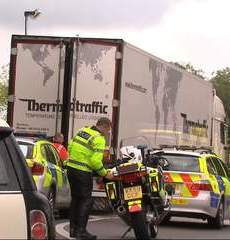