U.S. Secretary of State John Kerry will hold in-depth discussions Monday with Iran’s top diplomat in a bid to advance faltering nuclear negotiations, with a deadline just days away for a comprehensive agreement. The scheduled talks come a day after Kerry and the foreign ministers of Britain, France and Germany failed to reach a breakthrough. Kerry’s second day of talks will continue his efforts to gauge “Iran’s willingness to make the critical choices it needs to make,” according to a senior U.S. State Department official. The official didn’t say how long the discussions would run, but indicated a “potentially lengthy conversation” lay ahead.

It is now up to Iran to decide whether they are looking for a way to cooperate with the international community or if they want to remain in isolation.

The main focus will be easing the dispute over Iran’s enrichment programme. An extension of the talks would give more time to negotiate a deal that would limit the scope of such programmes. Discussions centre on imposing long-term restrictions on Iran’s uranium enrichment and against plutonium production materials usable in nuclear warheads. In exchange, the U.S. and other powers would cancel a series of trade and oil sanctions against Iran.

If no breakthrough is achieved, it doesn’t mean that [the] talks have failed. 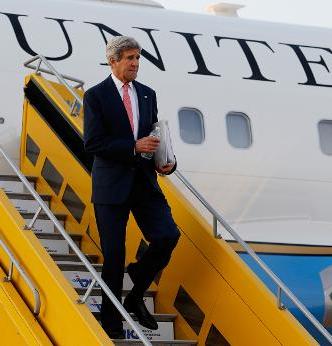