NATO chief Anders Fogh Rasmussen urged Russia to “step back from the brink” during a visit to Kiev on Thursday and vowed support for Ukraine as fears mounted that Moscow was preparing to send troops into the conflict-torn east of the country. His visit came as the centre of the main rebel bastion Donetsk was hit by sustained bombardment for the first time in four months of fighting, and a dozen civilians were killed around the region. An AFP journalist also saw a Ukrainian fighter jet shot down as it flew low over rebel-held territory. The plane crashed after an explosion in mid-air and the pilot was seen parachuting out. Amid heavy fighting and political manoeuvring, Kiev scrapped a ceasefire around the crash site of Malaysia Airlines Flight MH17, a day after international experts suspended work there due to ongoing clashes.

NATO stands ready to support Ukraine with advisers and assistance [against] Russian aggression.

Russia meanwhile struck back at punishing Western sanctions by announcing a “full embargo” on foods from the United States and the European Union, and threatening to ban flights from crossing its airspace. Rasmussen’s visit to Kiev came just a day after NATO accused Moscow of massing some 20,000 troops on the border with its former Soviet neighbour. The West accuses Russia of supporting and instigating the insurgency in eastern Ukraine, sending tensions with Moscow soaring to their highest point since the Cold War. “I call on Russia to step back from the brink, to step back from the border. Do not use peacekeeping as an excuse for war-making,” Rasmussen added, calling on Moscow to “stop its support for separatists”. NATO has warned that Russia could invade Ukraine under the pretext of a “humanitarian” mission, but Moscow has dismissed claims it has ratcheted up troop numbers.

Today, Ukraine’s freedom and future are under attack. Instead of de-escalating the conflict, Russia continues to destabilise Ukraine. 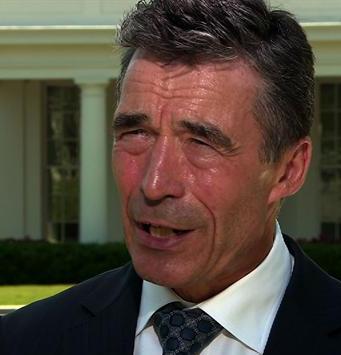