Oscar Pistorius has denied claims he was involved in a “bar brawl” in a nightclub days after the final evidence was heard in his murder trial. The Paralympian and Olympian claimed he was approached at The VIP Room in Johannesburg by a man who “aggressively interrogated” him about his trial for the murder of his girlfriend, Reeva Steenkamp. Businessman Jared Mortimer told local media that Pistorius insulted his friends and began poking him in the chest at the club.

The individual, according to my client, started to aggressively interrogate him on matters relating to the trial. An argument ensued during which my client asked to be left alone. Oscar soon thereafter left the club with his cousin.

"My client regrets the decision to go to a public space and thereby inviting unwelcome attention," said Pistorius’ spokeswoman Anneliese Burgess. Pistorius, 27, claims he heard an intruder in his house and "in fear for his life" approached a closed toilet door and fired four shots through it on Valentine’s Day in 2013. He said he thought Miss Steenkamp, 29, was still in the bedroom when he opened fire. The double-amputee, known as the Blade Runner, will be back at Pretoria High Court on Aug. 7 for closing arguments. 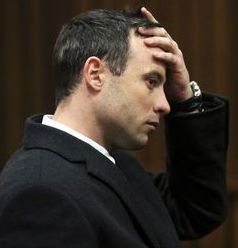