With top speeds of 83 kilometres an hour, modern radar systems and elite marine officers, the 10-metre Philippines’ Special Boat Unit vessels are bad news for illegal fishermen. Set up four years ago with funding from the U.S. government, the unit’s mission is to patrol the near-2,000-kilometre coast of Philippines’ most western island of Palawan. Thieir mission is to combat human trafficking and stop poaching of rare fish in and around the province. Recently, the unit last month arrested nine Chinese fishermen in hotly contested South China Sea waters off Palawan and seized their boat.

Without those (gunboats) the poachers would be laughing at us.

Police said the boat contained hundreds of endangered hawksbill sea turtles, many of them dead. However the Chinese bust occurred more than 100 kilometres off Palawan in a part of the South China Sea that the Philippines insists it has sovereign rights over. But it is also claimed by China, Vietnam, Malaysia, Brunei and Taiwan. The arrests fuelled a decades-long but increasingly bitter row between the Philippines and China over their competing claims to parts of the sea, and the Chinese government demanded the fishermen be immediately released. 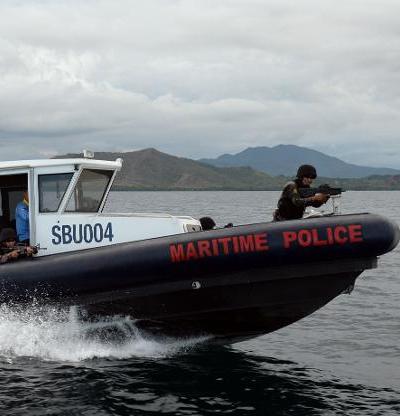