Amateur video has captured the moment a pilot was forced to abort a landing to avoid hitting another plane crossing the runway in front of him. Footage of the near-miss collision shows a Boeing 767 from the Russian airline UTair coming in to land on a runway at Barcelona’s El Prat Airport. With the plane just feet from touching down, an Aerolineas Argentineas Airbus A340 slowly taxis across the runway and forces the still-airborne pilot to respond to the emergency by pulling back into the air.

[It was] one of the worst experiences I have ever had.

Miguel Angel, plane enthusiast who caught the moment on film

It was not clear whether the taxiing airbus was cleared to cross the runway. Sky’s Technology Correspondent Tom Cheshire said Spain’s Airports and Air Navigation (AENA)—which manages Spain’s airports—has said the incident was nothing to worry about and within the margin of error. 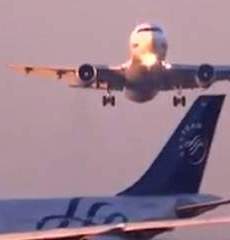