Google’s mapping service rolled out a gamefied version inspired by the classic Pac-Man, turning the real streets of a city into a labyrinth to gobble up pellets and ghosts. A Google spokeswoman said the game was an early April Fool’s joke. It allows users to play the game featuring the popular character created in 1980 in select locations.

PAC-MAN and Ms. PAC-MAN can’t agree on which side is prettier: the American or the Canadian. Which side do you fall on, eh?

If there are not enough roads at a given site, the game cannot be played, and Google alerts users that “it looks like Pac-Man can’t play here.” It was unclear how long the feature would be available. Play on Google Maps was similar to that of the classic arcade game, with desktop computer users manipulating the yellow Pac-Man character with keyboard keys to eat up pellets, white ghosts and fruit while avoiding colored ghosts. 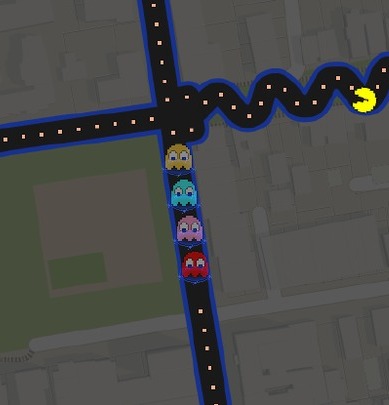