Four men have been arrested after £25m worth of cocaine was found hidden inside fake plastic bananas. The illicit haul was discovered in the bananas which were brought to the UK from Colombia. British Police said the illicit stash arrived at Dover on Thursday and was delivered by lorry to a trading estate in Hartlip, Kent. A man was seen unloading the shipment and locking up the warehouse.

The recovered drugs have a wholesale value of around £7 million, with a street value in excess of £25 million. All four men remain in custody at a London police station.

Detectives kept watch over the warehouse, while other officers followed three Colombian men to an internet cafe in London, where they are believed to have picked up email instructions relating to the drugs. The men from Lambeth and Kent were arrested as they left the cafe. Officers in Kent raided the warehouse and found 150kg of the class A drug compressed into plastic bananas and hidden among the real fruit. The man who unloaded the shipment, who is from Kent, was also arrested but the lorry driver has been ruled out of the conspiracy. 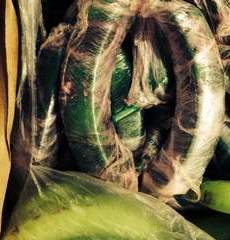