Pope Francis’s suggestion that Muslims are not doing enough to counter terrorism may increase tension between the West and Islam, but it reflects sincere concern in the Church over the issue, Vatican experts said Monday. In what Church watchers described as a significant toughening of his tone, the pontiff has called on Muslim political, religious and intellectual leaders worldwide to “clearly” speak out in condemnation of those who kill in the name of Islam. The Pope’s appeal came on Sunday evening as he returned from a trip to Turkey.

If interfaith dialogue is serious, it has to turn into action when inhuman things happen. The pope is not judging, looking down on or lecturing anyone. That is not his tone, it is recalling that we have to live together.

While in Turkey, the 77-year-old pontiff was lectured by President Recep Tayyip Erdogan over the role of what he described as rising anti-Muslim prejudice in Western countries in helping to foment the militancy that has given rise to the Islamic State (IS) group in Iraq and Syria. Francis’s comments were in response to a question about the “Islamaphobia” issue raised by Erdogan. Responding at length, it was notable that the pope, given his frequent statements on the plight of migrants to Europe, declined to acknowledge any problem with the treatment of Muslims in the West, according to a prominent American Vatican expert.

He had the opportunity to take the deal and he really didn’t. Other popes, including John Paul II after 9/11 and Benedict XVI, have said similar things but it was the first time that Francis has been this clear in pointing a finger at leaders of the Muslim world and said ‘you have to do something’. 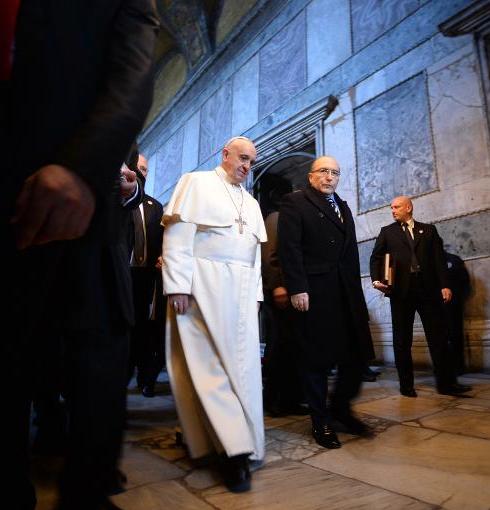