Scientists and art experts have found a hidden painting beneath one of Pablo Picasso’s first masterpieces, “The Blue Room,” using advances in infrared imagery to reveal a bow-tied man with his face resting on his hand. Now the question that conservators at The Phillips Collection in Washington, D.C., hope to answer is simply: Who is he? It’s a mystery that’s fuelling new research about the 1901 painting created early in Picasso’s career while he was working in Paris at the start of his distinctive blue period of melancholy subjects.

It’s really one of those moments that really makes what you do special.

Patricia Favero, the conservator at The Phillips Collection

Conservators have long suspected there might be something under the surface of “he Blue Room.” Brushstrokes on the piece clearly don’t match the composition that depicts a woman bathing in Picasso’s studio. A conservator noted the odd brushstrokes in a 1954 letter, but it wasn’t until the 1990s that an X-ray of the painting first revealed a fuzzy image of something under the picture. It was not clear, though, that it was a portrait. 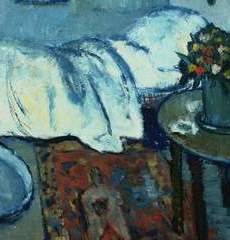