A pregnant woman is lucky to be alive after she was run over by an underground train in Beijing. The train driver was forced to slam on the emergency brake as the woman, who is five months pregnant, toppled onto the subway tracks. A photograph shows Yue Yan Mai, 31, crouching under the oncoming train as it screeched to a halt.

I’m a bit unsteady on my feet because of the pregnancy.

The front of the train passed over the woman, who was able to crawl out from under it. Alarmed onlookers then pulled her off the tracks and she was taken to a local hospital where she was treated for minor injuries. The woman reportedly said she had been tired and impatient to get home so she leaned over the platform to look for an approaching train. She then overbalanced and fell onto the tracks. 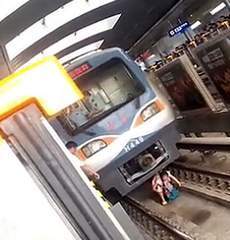