Radiation from Japan’s 2011 Fukushima nuclear disaster has for the first time been detected along a North American shoreline, though at levels too low to pose a significant threat to human or marine life. Trace amounts of Cesium-134 and Cesium-137 were detected in samples collected on Feb 19 off the coast of Ucluelet, a small town on Vancouver Island in Canada’s British Columbia, said Woods Hole Oceanographic Institution scientist Ken Buesseler.

Predicting the spread of radiation becomes more complex the closer it gets to the coast.

In March 2011, an earthquake and tsunami struck the Fukushima nuclear plant, 209 km northeast of Tokyo, sparking triple nuclear meltdowns, forcing more than 160,000 residents to flee from nearby towns, and contaminating water, food and air. It was the world’s worst nuclear disaster since Chernobyl in 1986. Buesseler said he expects similar low cesium levels to gradually reach other North American shores, possibly extending along the U.S. West Coast from Washington state to California. 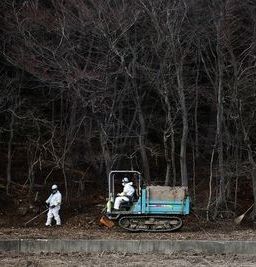