Tearful elephant Raju—who made worldwide headlines after crying when he was freed from 50 years of abuse—has found himself a girlfriend and had his first good meal in years. The five-and-a-half tonne animal was freed this week by a wildlife charity after five decades of being shackled and beaten in Uttar Pradesh, India. After being driven to the safety of an elephant conservation centre in Mathura, northern India, Raju is being nursed back to health—and has even found himself a female companion. He was introduced to Phookali, the first member of his new family who is also a rescued elephant saved two years ago.

Until we stepped in, he’d never known what it is like to walk free of his shackles.

Phookali and Raju shared a meal of mangoes, bananas, biscuits and jackfruit together and appeared happy in each other’s company during the heartwarming meeting. Phookali too was the subject of a dramatic rescue, as her owners refused to release her. She had a large abscess on her head that took several months to heal. Raju is being treated for leg wounds caused by 50 years of abuse—including being chained in spiked shackles—but is returning to health thanks to the work of charity Wildlife SOS. The brave elephant made international headlines on Monday when heartbreaking pictures emerged after his rescue. 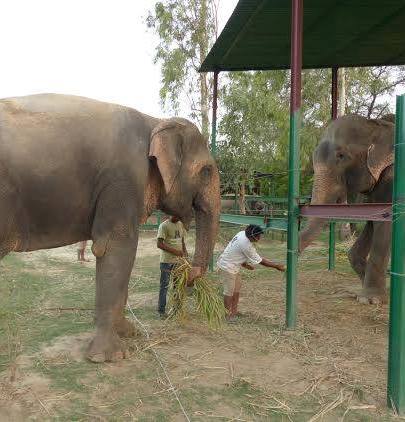