A Ferrari considered to be one of the greatest models ever built has sold at auction for a record £22.84m ($38.3m). The 1962 Ferrari 250 GTO Berlinetta is one of only 39 models made. The car sold at auction was the 19th of the 39 and has been owned by the Ferrari and motor-racing enthusiast Violati family since 1965. It competed in a number of races including one which ended in tragedy when, in 1962, driver and former French ski champion Henri Oreiller was killed.

It’s been a genuine privilege to represent this outstanding car and we are absolutely delighted with today’s results.

The wrecked car was repaired and the family continued to race it until very recently. The Ferrari went under the hammer at Bonhams’ auction in Carmel, California, and the huge crowd watching the bidding clapped as the auctioneer confirmed the final price. That topped the previous record for a car sold at auction, set at Bonhams’ Goodwood Festival of Speed auction in Sussex last year, with the sale of a 1954 Mercedes-Benz W196 R F1 Racer for $30m (£18m). 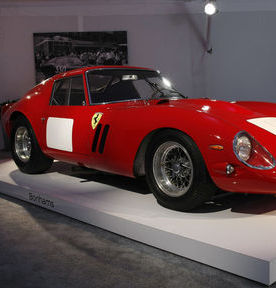