The 24th James Bond movie will be called Spectre and filming will begin next week, director Sam Mendes has announced. The Oscar-winning director revealed the hotly-anticipated title at an event at Pinewood Studios in Buckinghamshire, where he also outlined details of the cast and film locations including naming Lea Seydoux and Monica Bellucci who will become Bond girls. Oscar-winning Austrian actor Christoph Waltz will play a villain in the film while Andrew Scott, best known for his role as Moriarty in BBC1’s Sherlock, will join the cast as one of 007’s Whitehall bosses. Bond will once again be driving an Aston Martin, this time a DB10. Movie fans saw a previous Aston, his vintage DB5, blown to pieces in Skyfall. The film is named after the shadowy terrorist organisation created by Bond author Ian Fleming which first appeared in his novel Thunderball.

I’m very excited to be going to these locations over seven months, which is how long we’ll be shooting.

Daniel Craig, who was present at the announcement, will be back for a fourth outing as Britain’s most famous secret agent, following his last adventure in Skyfall - which was the highest grossing film of all time in the UK. Naomie Harris will star as Miss Moneypenny again, while Ralph Fiennes will come back as Gareth Mallory - the new M, whom film fans saw succeeding the character played by Dame Judi Dench in Skyfall. Ben Whishaw will be back in the role of Q and Rory Kinnear will play Bill Tanner again. Screenwriter John Logan is another who will return while Hoyte van Hoytema will take charge of photography again. The film will be shot at locations including London, Rome, Mexico City, Tangier and Erfoud in Morocco and Solden in the Austrian Alps - where Bond will return to the ski slopes. Large parts will also be filmed at the Pinewood Studios, which has long been home to the hit movie series. 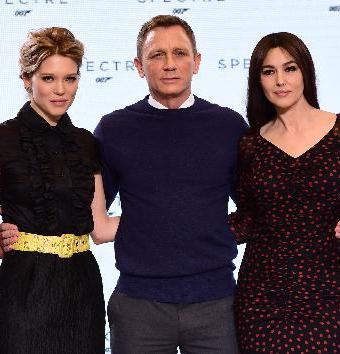