There is growing unrest in the sprawling region of Xinjiang, where the native Muslim Uyghur people are seeking more autonomy from Beijing. In a televised confession on Sunday, a teenager involved in an attack on a games room in Hotan City last week told China’s state television CCTV he had been influenced to carry out a “holy war.” Police said the gang had been inspired by watching overseas religious “extremist” videos to enter a games room and use axes to slash at people playing mahjong.

Today thugs crashed a car into the public security building of Kargilik county in Xinjiang’s Kashgar prefecture and set off an explosion. Police took decisive action and shot dead 13 thugs.

The confession comes after 13 people were shot and killed by police in Kashgar on Saturday. Those killed were allegedly involved in an attack on a police station, in which a car was driven into a police building and set off explosives. Three policemen were injured. Exiled Uyghur groups and human rights activists also said China’s own repressive policies in Xinjiang have provoked the unrest. 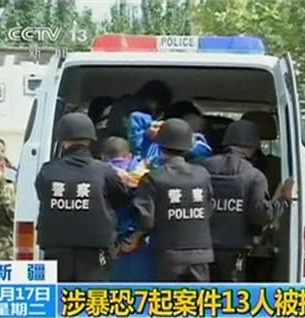