Israel on Tuesday launched its largest offensive in the Gaza Strip in nearly two years, carrying out a blistering aerial assault on scores of targets and killing 25 people in what officials called an open-ended operation aimed at ending weeks of heavy rocket fire. As Gaza militants unleashed salvos on cities including Jerusalem and Tel Aviv, Israel mobilised forces along the border for a possible ground invasion. The offensive set off the heaviest fighting between Israel and the Islamic militant group Hamas since an eight-day battle in November 2012. The militants fired about 160 rockets at Israel, including a strike that reached the northern city of Hadera for the first time, bringing the total to 434 targets struck since the start of the operation on Monday night. Israel said it attacked more than 150 sites across Gaza.

I have ordered the military to significantly broaden its operation against Hamas terrorists and against the other terrorist groups inside Gaza. … I call on you to display patience because this operation could take time.

In southern Israel, hundreds of thousands of citizens were ordered to stay close to home because of the rockets. Israeli streets were also quieter in Tel Aviv and Jerusalem after attempted rocket strikes set off air raid sirens in Israel’s two largest cities. The Jerusalem municipality said it was opening special bomb shelters. 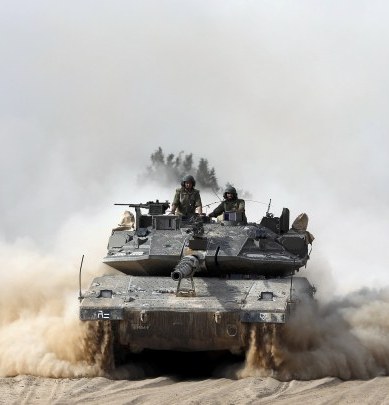