This bud’s for you: 3D printed headphones may actually stay in your ears

Nikki Kaufman a founding member of Quirky, a New York-based inventions lab that specializes in 3D printing, announced today a pair of 3D-printed earbuds called Normals with the tagline “one size fits none.” With Normals, no two earbuds are alike—not even your own. Normals are far from the first custom earbuds on the market, but most will cost you several hundred dollars, and getting fitted can get messy.

The doctor squirts silicone in your ear, you clench your jaw for 10 minutes, and three to six weeks and $500 to $2,000 later, you get a pair of custom in-ears.

Kaufman hopes to piggyback on the viral nature of headphones, which have as of late become fashion statements as much as tools for listening to music. In recent years, Koss’ crisp, ’80s-esque PortaPro headphones have seen a resurgence amongst hipsters, and Beats meanwhile has brought headphone envy to the mainstream. Kaufman won’t disclose exactly who she’s enlisted to develop the audio technology, but says that some of the company’s engineers and contractors have worked for the likes of Sonos, Harman, Skullcandy, Bose, Beats and Shure. 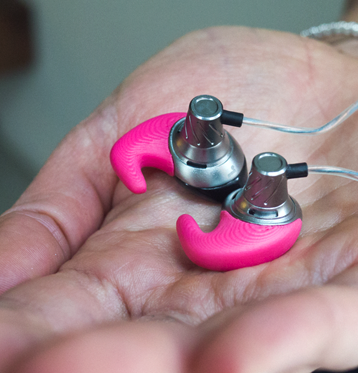