In a first, cosmologists have generated an enormous map of the distribution of dark matter in our universe, tracing the invisible substance by monitoring its gravitational effects on light. The picture maps clumps and voids of dark matter in a patch of sky covering around two million galaxies and showing features hundreds of millions of light years across, the scientific journal Nature reported. Dark matter is about five times more abundant than the matter we can see. Although invisible, its presence can be detected because it curves space-time.

The observations fit the standard picture of cosmology strikingly well, as dark matter is thought to be the main driver in the formation of large-scale cosmic structures.

Chihway Chang, from the Swiss Federal Institute of Technology

Researchers at the Victor M. Blanco telescope at the Cerro Tololo Inter-American Observatory in Chile photographed about two million galaxies in a large patch of southern sky - about the area of 700 suns. They pinpointed small distortions in the shapes of the most distant galaxies in order to map the mass of dark matter in the foreground. The map constitutes only three percent of the region of the sky that the project, known as the Dark Energy Survey (DES), will cover by the time it is concluded in 2018. It is named after dark energy - not dark matter - because its ultimate goal is to chart the distribution of matter well enough to measure dark energy, the enigmatic force that is pushing the universe to expand at an accelerating pace. 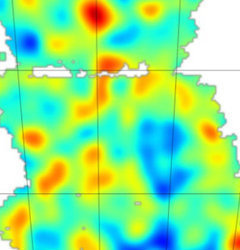