One of the most senior members of the Catholic Church in Australia has stepped down from his role after being charged with child sex abuse, the Church said on Monday. Max Davis, who heads the church’s military diocese, is reportedly Australia’s most senior clergyman and the first Australian Catholic bishop to be charged with a child sex offence. It is alleged he sexually abused a student while teaching at St Benedict’s College near Perth in 1969 – two years before he was ordained.

At that time – 45 years ago – the bishop was not ordained. The bishop emphatically denies the allegation and the charge will be defended.

The Catholic Military Ordinariate of Australia

The charge comes with a Royal Commission into Institutional Responses to Child Sexual Abuse underway in Australia after growing pressure to investigate widespread allegations of paedophilia, mostly in the Catholic Church. The military is separately conducting its own national inquiry into abuse after the service was rocked by claims of rape and sexual assault, a culture of cover-ups and a failure to punish perpetrators. Davis, who has been the top military bishop since 2003, is expected to appear in court in July. In May, Pope Francis pledged “zero tolerance” for anyone in the Church who abused children and likened sexual abuse to a “satanic mass”. 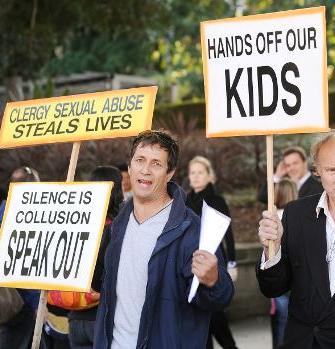