The United Nations has said it believes the Syrian regime used chemical weapons in civilian areas eight times in April. The report by the independent Commission of Inquiry said it believed chlorine was the agent used on multiple occasions. The report on the human rights situation also found that public executions, as well as amputations, lashings and mock crucifixions regularly take place on Friday in parts of Syria controlled by the Islamic State of Iraq and the Levant (ISIL, or ISIS).

UN investigators believe the Syrian government and ISIL insurgents are both committing war crimes and crimes against humanity in their war against each other. The UN report is based on 480 interviews and documentary evidence gathered by its team, which is trying to build a case for future criminal prosecution.

ISIS poses a clear and present danger to civilians, and particularly minorities, under its control in Syria and in the region.

Paulo Pinheiro, chair of the panel 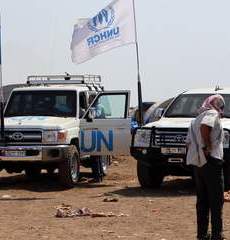