In his most memorable screen moment, Terry Richards played the Cairo swordsman in the first Indiana Jones movie, giving an intimidatingly skillful sword display before being shot dead by a smirking Harrison Ford. During the course of his five-decade career, Richards also battled four different 007s in nine separate James Bond films. He also held roles opposite the greats, like Kirk Douglas in “The Vikings,” and parts in films like “The Princess Bride,” “The Bourne Identity,” “Flash Gordon,” “Zulu” and “The Dirty Dozen.” Richards joined his first film in 1957, when a friend in the Welsh Guards mentioned that a project was looking for extras with military training. He died suddenly on June 14, his family revealed.

He’d been dragged behind cars, fallen off buildings, shot, punched. He always used to get up, but this time sadly he wasn’t getting up. 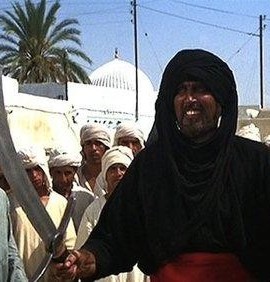