The secret to success at the Iran nuclear talks: a schoolroom whiteboard

In a hi-tech age of gadgets and gizmos, a simple whiteboard found in classrooms around the world was the tool that helped negotiators seal the complex parameters of a Iran nuclear deal. It was the highly-organised Under Secretary Wendy Sherman, who has led the negotiations, who early on hit on the idea of a whiteboard as a way of illustrating what she has long referred to as a “Rubik’s cube”. In Lausanne the whiteboard on wheels followed her from room to room as she and Kerry met with Iranian Foreign Minister Mohammad Javad Zarif and his team.

It was just a very integrated, very interactive back-and-forth kind of a process.

The idea was to try “to make sure that we and Iran were seeing the picture in the same way,” another senior administration official said. The whiteboard appealed to the Iranian team “because if they get paper, they’ve got to take it back to Tehran,” the State Department official said. There was one heart-stopping moment when a negotiator used a permanent marker to write down classified calculations. They took some frantic rubbing out. 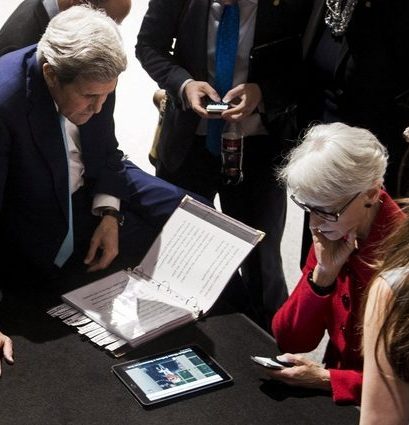