Julian Assange has told a news conference he will leave the Ecuadorian Embassy in London “soon” after more than two years holed up inside the building. The Australian spelled out his plans for his next moves alongside the Ecuadorian Foreign Minister Ricardo Patino at the embassy in Knightsbridge. Widespread reports have suggested the WikiLeaks website founder needs hospital treatment for heart and lung problems. But the 43-year-old denied he was leaving the embassy for health reasons.

It is an environment in which any healthy person would find themselves soon enough with certain difficulties they would have to manage.

Assange requested political asylum from Ecuador in June 2012, and has been under continued surveillance, and with police stationed outside the embassy since. He will be arrested if he leaves the building. He has been investigated by U.S. authorities since WikiLeaks published leaked military and diplomatic documents in 2010. He is facing an arrest warrant in Sweden over allegations he sexually assaulted two women. He denies the allegations.

There has been two years of great uncertainty and a lack of legal protection. This situation must come to an end. Two years is simply too long. 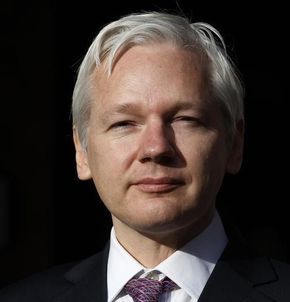