Authorities say 24 people stranded on a roller coaster have been rescued from near the top of the ride at the Six Flags America theme park in Maryland. Prince George’s County Fire officials said it took about five hours yesterday to rescue 17 adults and seven children from The Joker’s Jinx roller coaster. Assistant Fire Chief Paul Gomez said all the riders were sitting upright.

The ride has a sophisticated, computerised safety system that can cause such ride stoppages. While we are not yet sure what caused the stoppage, the ride performed as it is designed to.

A few riders had cramps, back pain and dehydration, but there were no major injuries. A Six Flags America spokesman said in a statement that it is not yet clear what caused the ride to stop but that its computerised safety system “performed as it is designed to.” Six Flags’ website says the ride goes 60 miles per hour and upside down four times. A spokesman from the park said the ride would remain closed while an investigation was carried out. 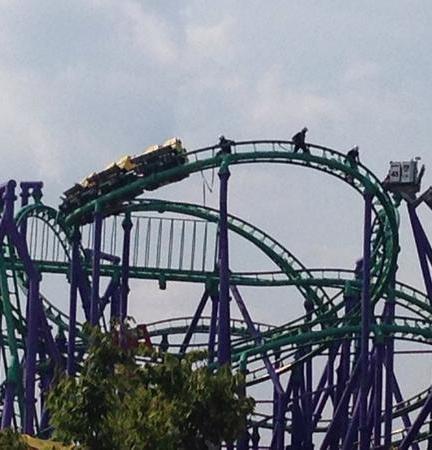