North Korean leader Kim Jong-Un has climbed the country’s highest mountain, state-run media has reported. Photos were released of the smiling and windswept 32-year-old (pictured) standing on snow-covered ground at the top of Mount Paektu, with the sun rising behind him. One image shows dozens of troops cheering deliriously as the leader greets them at the peak.

State-run news service KCNA reported the young ruler of the impoverished but nuclear-armed North scaled the mountain on Saturday morning along with hundreds of fighter pilots, and top army and party officials. Pyongyang has always insisted Kim Jong-Il was born on the mountain - although many historians say he was born in Russia - and praised the family for their “Mount Paektu bloodline”. The story is the latest run by state media on the feats of the Kim dynasty, which has ruled for more than six decades with an iron fist and pervasive personality cult. Just last week the regime insisted Mr Kim could drive by the time he was three years old. 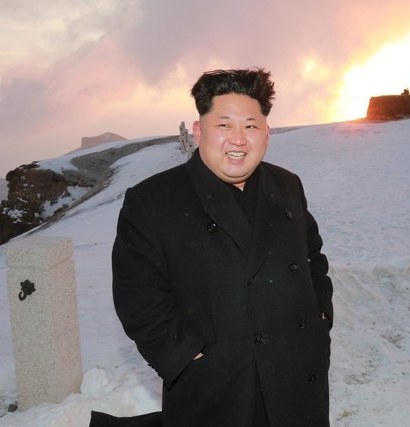