The United States and Cuba have announced a massive policy shift following an exchange of prisoners, including US government contractor Alan Gross. Barack Obama today outlined a new “policy of engagement” with Cuba that included re-establishing diplomatic relations, easing a trade embargo and relaxing travel restrictions. The President said ending the “outdated approach” to Cuba was necessary to normalising relations with the island country. Mr Gross, who was held in a Cuban prison for five years, arrived at Joint Base Andrews outside Washington shortly after 11am local time. Cuba also released an unidentified “intelligence agent” as part of prisoner swap that included three Cubans imprisoned in Florida for spying.

These steps will be the most significant changes to our Cuba policy in more than 50 years.

Pope Francis played a key role in helping both sides reach the agreement, the President said. Cuban President Raul Castro said he spoke to President Obama by phone on Tuesday. Speaking to Cuban citizens on state television, Mr Castro said he welcomes the restoration of relations with the United States, but stressed profound differences remain. He said both countries have to learn to live with their differences “in a civilised manner”. Mr Gross, 65, was arrested on 3 December 2009. The US government contractor was sentenced to 15 years in prison for importing banned technology and trying to establish clandestine internet services for Cuban Jews. 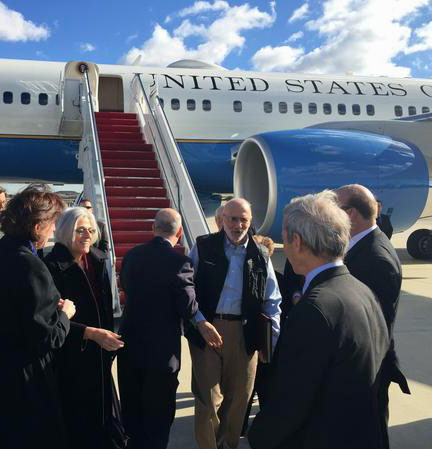