The Obama administration pushed back at a torrent of Israeli criticism of U.S. Secretary of State John Kerry’s latest bid to secure a ceasefire between Israel and Hamas, with U.S. officials saying Kerry had in no way abandoned key Israeli needs. Some officials who asked for anonymity said the attacks on Kerry crossed a line and put the relationship between the U.S. and Israel in jeopardy. The White House’s ire came on a day when an apparent lull in the Gaza conflict was suddenly broken by blasts in a Gaza park and hospital that left 10 dead, nine of them children, and dozens of others wounded. Both sides disclaimed responsibility.

Israel has no better friend, no stronger defender than John Kerry … [Criticism of Kerry is based on] people leaking things that are either misinformed, or attempting to misinform.

Israeli media commentators have levelled almost nonstop criticism at Kerry in recent days over his attempts to bring Qatar and Turkey—two countries viewed by Israel as strong Hamas supporters—into the ceasefire negotiations. Kerry was also being accused of abandoning some of Israel’s key demands during the negotiations. Kerry did not directly mention the criticism during brief remarks Monday. However, he did seek to debunk the notion that the U.S. had backed away from its support for the demilitarization of Gaza. “Any process to resolve the crisis in Gaza in a lasting and meaningful way must lead to the disarmament of Hamas and all terrorist groups,” Kerry said. U.S. frustration with Israel seeped into the White House’s readout of a phone call Sunday between President Barack Obama and Israeli Prime Minister Benjamin Netanyahu. The White House said Obama told Netanyahu that the U.S. had “serious and growing concern” about the worsening humanitarian situation in Gaza.

U.S. Secretary of State of State John Kerry ruined everything. 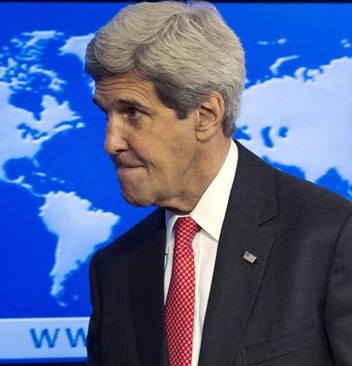