A senior UK Independence Party (UKIP) politician has defended reports he urged young party members to “copy Hitler”. The Mail On Sunday acquired a recording of West Midlands MEP Bill Etheridge telling prospective candidates to “pick up little moments” of Hitler’s speaking style. Etheridge can be heard saying the Nazi leader was “a hateful figure who achieved a great deal”. Etheridge has called the article a “silly, unpleasant attack”.

Hitler was an evil, monstrous tyrant but that doesn’t mean he wasn’t good at public speaking. I regret that the Mail should stoop so low—it’s embarrassing for all of us.

The recording was made last week at a conference for UKIP’s youth wing, Young Independents. Etheridge, who is also a Dudley councillor, is heard saying: “If you look back to the most magnetic and forceful public speaker possibly in history”. He added: “I’m not saying direct copy—pick up little moments”.

I thought nothing could surprise me any more, but this just goes to show that [Nigel] Farage has completely failed to clean up his party. One of his MEPs training young candidates to speak like Hitler? Simply unbelievable.

Labour MP Mike Gapes in the Mail On Sunday 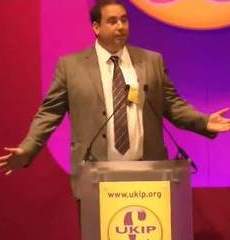