The leaders of Russia and Ukraine agreed on Tuesday on the need to “de-escalate” the conflict in eastern Ukraine but fundamental differences remain, the Belarussian president who hosted the talks said. After about six hours of negotiations with their Belarussian and Kazakhstan counterparts and top European Union officials, presidents Vladimir Putin of Russia and Petro Poroshenko of Ukraine began a one-on-one meeting, officials on both sides said. The talks were aimed at defusing a separatist war that has heightened tensions between Russia and NATO, and prompted the United States and EU to slap sanctions on Russia, drawing retaliation from Moscow. A UN report obtained by Reuters said at least 2,200 people have died in the conflict.

We all wanted a breakthrough … But the very fact of holding the meeting today is already a success, undoubtedly … The talks were difficult. The sides’ positions differ, sometimes fundamentally … Everybody agreed on the need to de-escalate and free hostages.

In a televised statement at the start of the talks, Putin urged Poroshenko not to step up his offensive against the pro-Moscow rebels, and threatened to slap economic penalties on Kiev for signing a trade accord with the European Union. Poroshenko replied by demanding a halt to arms shipments from Russia to the separatist fighters. The pair shook hands at the start of the meeting in the Belarussian capital Minsk, only hours after Kiev said it had captured Russian soldiers on a “special mission” on Ukrainian territory. 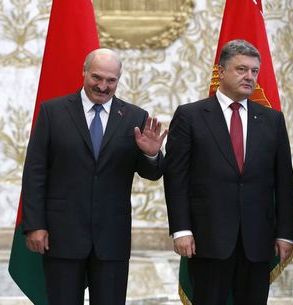