Ukraine has said it will stop an unofficial Russian aid convoy from crossing into a rebel-held part of the country. Ukraine National Security and Defence Council spokesman Andriy Lysenko said the convoy of 280 lorries was not certified by the official aid coordinator, the International Committee of the Red Cross (ICRC). The convoy of trucks departed from a depot near Moscow on Tuesday morning and was expected to take up to a day to arrive at an undisclosed border location.

We see the Russians developing the narrative and pretext under the guise of a humanitarian operation. And we see a military build-up that could be used to conduct such illegal military operations in Ukraine.

The ICRC confirmed it had no information on what the trucks were carrying or where they were going but Russian media said the vehicles were loaded with 2,000 tons of goods. The mission has raised fears in Ukraine and the West that it is being used as a pretext for sending troops, agents or arms to rebel-held areas adjacent to the Russian border. NATO chief Anders Fogh Rasmussen said there was a “high probability” that Russia could intervene militarily in eastern Ukraine. 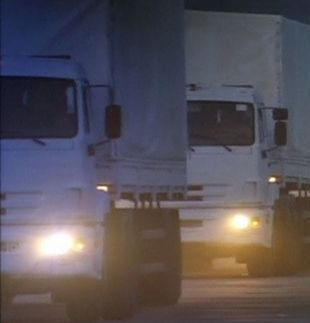