Ukrainian troops have attacked pro-Russian separatists in the southern port of Mariupol, officials said. Four soldiers were wounded as government forces retook buildings occupied by rebels in the centre of town, according to interior minister Arsen Avakov. He said troops also destroyed a light armoured vehicle used by the separatists. The renewed fighting comes as rebel leaders confirmed they have three tanks

Ukraine and the West have accused Moscow of fomenting the unrest in the east, but Russia has denied sending troops or weapons to Ukraine. Ukrainian president Petro Poroshenko, who took office less than a week ago, yesterday rallied support for his plan to end fighting, in phone calls with Russian president Vladimir Putin and German chancellor Angela Merkel. Mr Poroshenko told Ms Merkel he was willing to negotiate, but not with what he called terrorists, and could offer amnesty to those who did not have “blood on their hands 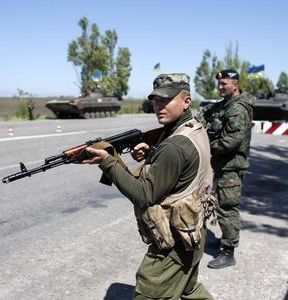